Joseph Haydn (1732-1809) composed 78 string quartets over the period of 40 years. Seems the power of all his quartets have never been diminished, but his last 6 string quartets feels like continuously getting more bold and more burnished one after another. All 6 quartets were composed during his grand concert trip to London making opus 76. All 6 quartets stand alone in a special historical context coming after Mozart and before Beethoven.

The 4th quartet in B-flat is known by the English nickname “Sunrise”.

The first movement begins with the sustained glow of a single, soft chord over which a solo violin slowly traces the rising sun. The “introductory” motives keeps repeating every time through the movement with higher intensity, like rising sun getting brighter as getting higher. This tendency of constant development pervades the quartet from the beginning to the end.

The Adagio, the 2nd movement, is a kind of holy hymn, a delicate praying tinged with a mysterious sorrow. We could imagine in this movement a somber sunset, a counterweight to the overflow of the first movement.

As the Minuet found its way into the standard plan of the classical symphony and quartet, Haydn, Mozart and Beethoven expanded its range to become the wild card for a lively triple-meter dance. Here, Haydn transforms the French courtly dance into a robust German waltz with a steady downbeat and strong forward momentum.

The finale begins with what sounds like a charming English folk song, crisp and tuneful with a jolly lilt. Like Beethoven, Haydn had a unique skill for endlessly transforming simplicity into elegance through the power of imaginative variation. The tune sets our expectations for a lively rondo, but it is the tune itself that takes on the adventure, on the parade of thematic variations. The marvel of Haydn’s ingenuity in this last movement is only enhanced by constantly accelerating tempo as the last variation scurries beyond our breathless reach into a giddy final cadence.

Art, Music and Creativity can be a tonic for all of us.

Following the latest advice from the Government, it is with much regret that INGUZ-Quartet and INGUZ-Duo have taken the decision to cancel concerts with immediate effect.

The health and wellbeing of artists and visitors is a top priority and given the latest medical and scientific recommendations that people should avoid large social gatherings, we have made the very difficult decision to take this action in order to play our part in stopping the spread of the virus.

The impact of this decision, the hard work of musicians, the teamwork around the concerts to support information and service is immense.

We are very sorry that we have to close the doors for the events. We believe that access to Art, Music and Creativity can be a tonic for us all and we will be trying hard to find ways to keep that idea alive even though our venues are closed.

Our thoughts are with everyone who is being affected by this situation and we pass on our very best wishes to all of you and your loved ones.

We look forward to welcoming you back. Soon, we hope.

The Quartet is changing the cellist.

In January 2020 Inguz Quartet had to consider applying some changes in the setting of musicians due to ambitious plans for coming year.

Already on 5-th of April a new cello player Ephraim van IJzerlooij will join Inguz Quartet on a stage of Westvest kerk to perform a challenging program of 2 piano quintets in Schiedam.

Rehearsals have been planned and start in the end of February.

Ephraim is a Dutch and an all-round cellist. His playing distinguished as a poetry playing like.

For years of playing in various ensembles and projects, he developed himself as a teacher of Baroque music and become a dedicated Chamber musician.

During the NJO summer academy 2006 he led the cello section in four programs. In 2006 Ephraim worked with Sofia Gubaidulina on the implementation of her “Am Rande des Abgrunds”, including during the Cello Biennale Amsterdam.

Next to music, Ephraim writes poems. A collection of his (De Klank Van Stilte) was published by boekscout.nl in 2015.

Ephraim plays on a cello built by Daniel Roye, 2004 in Amsterdam. He purchased this instrument in 2013 with support from the SEM fund. The opening of this new exhibition will take place in De Grote Kerk in Gorinchem. This time the exhibition is dedicated to a very fragile and sensitive topic to many Dutch people which is trees and our environment.
This topic became a sensation and since 2018 has received many supporters who are striking for preserving nature and are against cutting trees.

Her Royal Highness Princess Irene of the Netherlands is the special guest at the opening of the exhibition. More over, Princess Irene is very well known for her activities for disarmament and for many works with nature and especially trees. 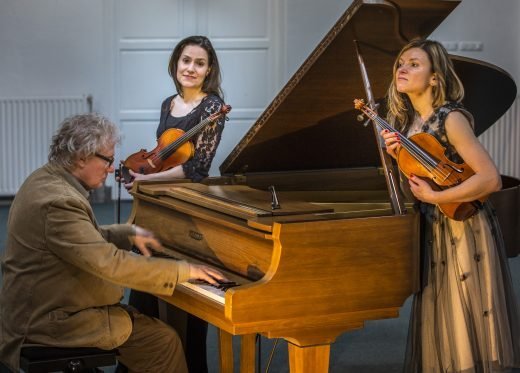 We as INGUZ-ensemble are very proud to be selected to play ‘Requiem for the Trees’ during the opening of the exhibition, as well as some other compositions and to be part of this very special event.
Do not miss this event!
https://gorcumsmuseum.nl/nieuws/pers
comments
0

The Happiness of Antonin Dvorak ‘American’

This classical music piece was written by Dvorak in his best time and best state of mind, which illustrates the excerpt of Dvorak’s letter he wrote to his friend Jindrich Geisler: ‘I have been on vacation since 3 June here in the Czech village of Spillville and I won’t be returning to New York until the latter half of September. The children arrived safely from Europe and we’re all happy together. We like it very much here and, thank God, I am working hard and I’m healthy and in good spirits.’

These days of contentment and family harmony, and the hospitality of the locals gave rise to an exceptionally joyful piece of music. The entire sketch for the quartet emerged within an astonishingly short period of time, a mere 72 hours, in fact, and the whole score was finished within twelve days. On the last page of the sketch Dvorak noted: ‘Thank God. I am pleased. It all went so quickly!’.

The String Quartet in F major is known as the ‘American’, not only since it appeared on the American continent, but also for the fact that it contains a number of elements typical for original African American and Native American music.

Nevertheless, certain scholars couldn’t find practically either Negro songs nor Native American melodies in the quartet.  For more than a century, musicologists have debated on the extent to which this quartet is ‘American’ or ‘Czech’.

Dvorak himself commented on this issue: ‘I know that I would never have written my new symphony, or the String Quartet in F major, or the quintet here in Spillville, if I had never seen America!’

In his quartet Dvorak breaks certain traditional notions of the quartet form, which is sonata cycle. He deliberately abandons ideas of sophisticated thematic treatment, dramatic development sections, complex polyphonic structures, or evenly balanced ‘dialogues’ between all the instruments.

This quartet also had success on INGUZ-Quartet’s 24 November debut concert.

Fancy to listen to it? Check it out below!

The second edition of “Winterklanken” will be held in Gorinchem on the 28th of December 2018.
“I am so proud to be part of this project in Gorinchem and together with ‘Huis van Inspiratie’ to cooperate, produce and perform Winterklanken, this year’s edition is going to be even more spectacular! “
I wish a lot of success to all of the musicians participating this year and a lot of fun and pleasure to audience for 28th of December. See you all on 28 December in Gorinchem!
Click here for more info
comments
0

Have you discovered already for yourself Joaquim Turina?

Spain’s nationalist musical renaissance was over by the end of the first half of the 20th Century.

Joaquim Turina was one of the foremost composers of renaissance. Apparently, Turina’s music has enjoyed a revival very recently and became most played and recorded in professional music studios.

Some facts over Turina:

J.Turina was born in Seville (1882-1949) and studied there and in Madrid. From 1905 till 1914 he lived in Paris and studied composition with Cesar Franck’s disciple, Vincent D’Indy at the Schola Cantorum, where he learned the mysteries of the “Cyclical Form” (meaning, what you hear at the beginning, you will hear again at the end). He studied the piano under Moritz Moszkowski. In composing works he was encouraged by Maurice Ravel and Claude Debussy, whose influences can be heard in Torina’s music, and, in turn, both Frenchmen wrote pieces influenced by Spanish music.

Have you listened to Turina ‘La oracion del torero’ (The Bullfighter’s Prayer)(1925)?

This composition is his most popular work and most often performed.

It is exquisite music of remarkable beauty and splandour. It is 8 minutes of a toreador battle at the bull’s arena. This is 8 minutes of the tense breathing, self-control, an eruption of temperament and finally a relief! This work represents the brightest influence of Debussy, the music language of gracefulness and tenderness.

what is more difficult to play on violin rather lyrical compositions or technical?

I believe it is a truly interesting master-course due to demanding and “must to play” music scores, that selected as demonstrating material and due to it involves highly importent skills study that good violinist must posses.

Duration of one master-class is 1,5 hour (with a break of 10 minutes)

Discount €75- If you take Master-Course, which is a package of 3 lessons, you get 10% discount