Russian, Beyond the traditions, Hymn of Thanksgiving to Divinity in the Lydian mode, Composed 2 year before death, The unsurpassed pinnacle of Western classical chamber music.

Beethoven was very much focused on having this composition finished by early February 1825. However the serious illness in the spring had interfered and only in May he was settled to write again and as a victory upon the sickness he celebrates it in his Heiliger Dankgesang, which became the third movement of this quartet.

Beethoven completed this quartet in the end of July. The public premiere was on 6th November, 1825. 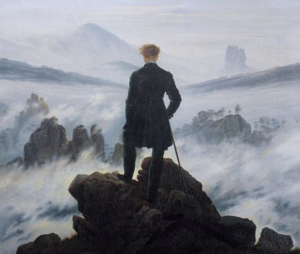 A little more about music and style of this composition.

String quartet No15 (opus 132) was the second of the late quartets to be written. Sketches indicate that Beethoven planned a four-movement design, but his focus was interrupted by a severe illness. Upon recovering, he wrote a new movement of "thanksgiving" that became the centerpiece of a rearranged five-movement quartet.

The confrontation of calculated but spontaneous simplicity with ferocious complexity in the late quartets is one of their chief hallmarks and surely one source of bewilderment for Beethoven's contemporaries.

His earlier works for string quartet usually have a classic opening, where the first violin remains the melody supported by the other strings instruments.

In his late, romantic, works for string quartet Beethoven has developed himself in terms of polyphonic writing.
Music of this string quartet opens with a rising semitone (G # / A), followed by a falling pair (F / E). The headline of the main theme can even be found in Die Grosse Fuge.It sounds so amazing, that the same a two-by-two semitone motif Beethoven incorporated in his late three quartets (opus 130,131,132).
The 1-st movement has a chromatic character. The tempos are varied, which was very modern and avant-garde for that time. It took Beethoven years of developing string quartet as a genre to get to this point of new style. Such great tempo contrasts not easily to be found in his early quartets.
The 2-nd movement has a more dancing character: a gentle sway of triplet  meter in a moderate pace. Allegro ma non tanto. Slightly sprawling music with a foil part Trio of ecstatic grace, a delicate celestial music box glinting with a filigree of precious gold tones - the gesture to enjoy the momentum.
The 3-rd movement has a very sung character in the Lydian key. The lydian mode evokes the otherworldly sacred church modes of the Renaissance, and the hymn, the ancient song of praise to the divinity. The music combines three instantly recognizable elements: a wisp of counterpoint, an austere hymn in four-part unison harmony, and a lightening strike of glittering virtuosity labeled in the score as "a feeling of new strength." Feels like Beethoven takes us to the heaven so divine this music is. 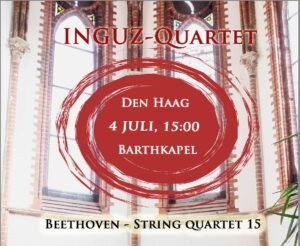 Reserving your seat is advised since only 50 seats are allowed.

Wearing a protecting mouth mask inside a building remains under obligation till the seat is taken.