GRATITUDE is the them of this program

Without a retrospect to the former we can not properly explain our attitude today and our approach in the future.  I think we have to be grateful to have each other, we have to be thankful for every day, every single given chance and opportunity of expressing ourselves, for the goal of today and dreams for the future. That is why I thought regarding the music selected for this recital GRATITUDE would be the right name. 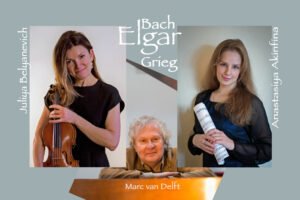 Insights into the pillars of the program:

a given nickname A love Duet, composed between the years 1717 and 1723 in Köthen

In 1774 the Bach’s son Carl Phillip Emanuel sent 6 sonatas (BWV 1014-1019) to Johann Nikolaus Forkel, who was writing a biography of Johann Sebastian Bach. In his letter to Forkel Bach’s son Carl wrote, “If any Adagio deserve the label ‘melodious’, then it is the third movement of the Sonata in E-major. Incidentally, Carl Emanuel Phillip referred to Bach’s six sonatas as “Clavier trios”, as the violin and the right hand of the harpsichord are equal partners, while the left hand plays a separate bass part – so these are real trio sonatas”.

Nevertheless his 6 sonatas have never became the most played or the best known, yet these works are among the finest treasures that High Baroque chamber music has to offer. The Sonata in E-major BWV 1016 for violin and harpsichord was, like the others, composed sometime during his years working as a Kapellmeister at the court of Cöthen; it shows how well Bach had absorbed the Italian sonata da chiesatradition, and follows the same basic pattern in the typical Corelli or Handel sonata da chiesa: slow-fast-slow-fast.

F.Kreisler - Tempo di Minuetto (In style of Pugnani) for Violin and Piano

E.Elgar - Sospiri or Adagio for Violin and  Piano, Op.70

This composition is a very special piece that was written by Dutch composer Marc van Delft to cherish the memories of my daughter Hanna. It was composed in 2018 and labelled Op.170.

It is rather exceptional and charming to hear music performed by a composer himself. For a composer, I can imagine, it is very important when own composition is being played preferably at the life time. It was premiered on 5th May 2018 in Schuilkerk in Gorinchem.

To add a little bit more to the story, thank to my dear beloved Richard who almost insisted on recording the composition this month in a studio, it helped me to shape the idea of including this piece to this concert and by this to Invite Marc van Delft to perform it with me.

Sonata has 3 movements, out of which Played: I - Allegro; II - Romance Andante

Edward Elgar (1857-1934) was the most influential English Classical Music composer. His Sonata for Violin and Piano Op.82 belongs to the group of four works that constitute Elgar’s final completed major composi­tions, the others being the String Quar­tet Op.83, the Piano Quintet Op.84, and the Cello Concerto Op.85. All four were composed during 1918 and 1919, in a tiny cottage in Brinkwells of the West Sussex countryside. It was a place where Elgar could rekindle his musical inspiration, and by which, too, he could withdraw himself from the constant e and forc­ible reminders of the changes the First World War had wrought. During the War, Elgar had been plagued by depression and frequent illness and he began to look back with increas­ing nostalgia to his childhood in the 1860s.

It was with the arrival of a piano at Brinkwells, on 19th August 1918, that Elgar began work on his Violin Sonata. His wife, Alice Elgar noted in her diary for that day: “Much excitement – the piano ar­rived…..” It is probable that 2-d-nd movement was composed first. Lady Elgar wrote on 24th August: “Elgar writing wonderful new music, different from anything else of his. So elusive and delicate.” Alice herself called it “Wood magic”. The progress was so rapid, that the whole sonata was written within two and half weeks.  It is aa world of sumptuous texture and colours, a world of indulgence and romance.

Elgar himself was a good violinist but still all his violin works through the life on he was checking with the violinist William Henry Reed, the concertmaster of the London Symphony.

On 14th October 1918 the Sonata was performed at the Elgars’ London home by Reed and El­gar to an invited audience.

Edward Grieg (1843-1907) was Norwegian composer and distinguished for the employment of folk into Classical music. In total E.Grieg has composed three Sonatas for violin and piano. The Violin sonata in G major, Op.13 is the 2nd one of the three, and was written within just three weeks of Grieg‘s honeymoon. It is a small wonder of happiness and peacefulness of the composer, with pensive and coolly melancholic nature of Scandinavian musical idiom.

Inspired partly by the eminent Norwegian violinist Ole Bull, Grieg had resolved to lend his music a more nationalistic quality by infusing it with his homeland’s more traditional idioms.

The Norwegian folk manner by that time a natural part of his vocabulary, and the Second Violin Sonata is impregnated with its contours.

It is indeed this characteristic of the piece that proved Grieg’s newly-founded ability to effectively marry folk elements and classical form. Like his contemporary, the great Czech nationalist composer Antonin Dvořák, Grieg only rarely quoted actual folk material, instead favoring ingenious simulations of it.

The Second Violin Sonata was dedicated to Johan Svendsen, Grieg’s comrade-in-art, although it was premiered by Gudbrand Böhn, with the composer at the piano, in the autumn of 1867.